The Jean Machacek Memorial Award is named after Jean Machacek who was an exemplary technologist in the state of Idaho from 1959 – 1978. This award is given to honor individuals in the profession of Radiological Technology. A nominee for this award shall be: 1) an active member or retired member of the ISRT, (2) worked as a technologist in the State of Idaho for at least five years, and (3) not have been a previous recipient of this award. The following is a short biography of Jean’s life and service followed by a list of previous recipients. 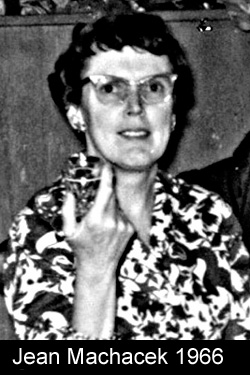 Jean Margaret Thompson was born April 4, 1918 in Twin Falls, Idaho. She married Alvin Machacek in Emmett, Idaho, in June 1973, and lived in the Buhl Castleford area. Jean’s ISRT activity began May 23, 1959 when Fairy Bowen, RT(R), introduced her at the annual conference for “having received her RT that year.” During the conference proceedings she was elected vice president because the ISRT was in need of some capable hands to take over the scrap book. Jean Thompson, RT(R) and Myrtle Stearly, RT(R) volunteered to act as state historians. Everyone who attended the annual conference this year in Pocatello can testify that these two ladies have done a fabulous job of recording our history. By the time 1962 arrived, the annual meeting was being held jointly with the ASRT in Seattle Washington, Jean was the President. Holding her position as historian, she served as conference chairman for the next two years. In 1965, Jean continued service as an executive board member, historian and official photographer. Her years of service kept adding up and by the time 1970 arrived, Jean was the Northwest Conference delegate. This position kept her busy organizing vacation time so that she could attend the ISRT Conferences, the Northwest Conference, and the ASRT Conference. She represented Idaho so well that she was elected President of the 1974 Northwest Conference. This three year position kept her extremely busy. These responsibilities weren’t phased out until Conference 1977, when she turned her delegate’s duties over to Bob Stevens, RT(R). May 1976 found the ISRT members honoring Jean with the “RT of the Year” award. Jean was honored again in May 1977 with a life time membership in the Society. This resume is only a fraction of the numerous activities and responsibilities in which Jean participated. She was a member of the Clear Lakes Toast Mistress Club, the St. Andrews Society, the order of the Eastern Star of Buhl, a Red Cross First Aid Instructor, a Home Health Care service worker, and an RN in the position of Nursing Supervisor of Magic Valley Memorial Hospital. This last position brought her into numerous activities with the Idaho Nurses Association. Jean will always be remembered for the many fine things she accomplished. Lastly, Jean Thompson Machacek died in an automobile accident August 14, 1978.

The Jean Thompson Machacek Memorial Award is given at state society meetings and the trophy is passed from one recipient to the next. To receive the Jean Machacek Award a nominee must be an individual who possesses the following attributes: